Too Many Bosses, Not Enough Leaders 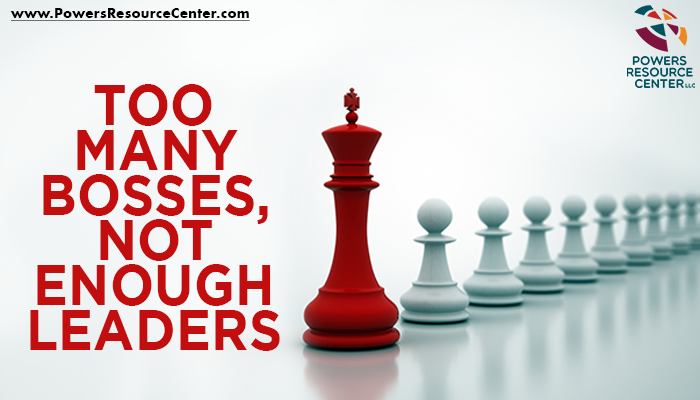 You got the title, the business card, maybe even the corner office. Well done! You have all the trappings of a leader. Around the office, people listen to you, other people report to you, you have a “seat at the table,” as they say.

You’ve earned this, right? Yes, probably. But here’s the hard truth – your work is not done. This is no time to rest on laurels. The bottom line is that anyone can be a boss, but only a few are true leaders.

Bosses are very different than leaders. Bosses tend to have a style that is about command and control. They micromanage. They wordsmith. They do things just because ‘they can.’ They intimidate and they are usually focused on the wrong things. They tend to lead with fear rather than encouragement. They are, just like the word, ‘bossy.’

Bosses sometimes disguise themselves as leaders, but inevitably they are revealed as imposters when their egos take over and they choose their own self-interests to the detriment of their team or organization. Bosses fundamentally believe that being in charge is the same as being a leader — but it’s not.

Leaders have several key differences from bosses. They have a humanity and humility that everyone around them can relate to and be inspired by. Leaders have empathy for others because they understand their role is not to do everything themselves, but to inspire people to their greatest potential.

And perhaps the most important leadership trait – and the hardest to pinpoint – is that we know it when we see it. Whether it’s in the boardroom, politics, the military, the front of a classroom or on the sidelines of a football field.

Make a commitment to embody true leadership traits. Share the credit. Be empathetic. Talk less, listen more. Be generous with your time and feedback. Lead by example and hold yourself to the same standards as you do everyone else. Be curious; act like a student of your business or industry. Be courageous – ask ‘why?’ or ‘why not?’ more.

If you find you need a little more support in developing leaders in your organization, give us a call at https://powersresourcecenter.com/leadership-training-coaching-denver-boulder-colorado/